DigiSigner is a cloud-based digital signature solution that caters to small businesses in industries such as real estate, human resources and law. It helps users to electronically sign and send documents to stakeholders and clients. DigiSigner offers built-in templates and custom branding tools for documents. It is compliant with digital signature laws including ESIGN, UETA and eIDAS. Documents can be signed using a mouse or uploaded as an image. The solution sends email alerts to the sender when recipients have completed signing. Users can also embed documents directly on their websites using the DigiSigner API. DigiSigner employs SSL-grade encryption for document security. Documents are stored in a centralized repository and can be tagged under related categories. DigiSigner offers services on a monthly subscription basis that includes support via phone and email. 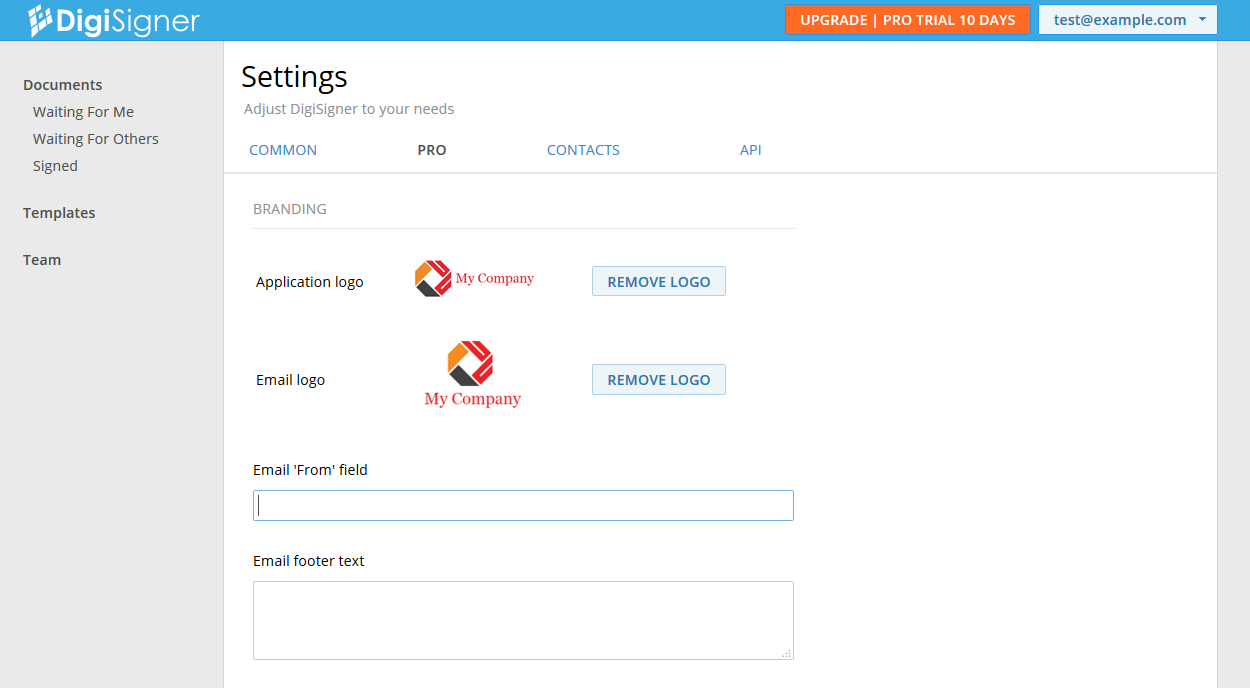 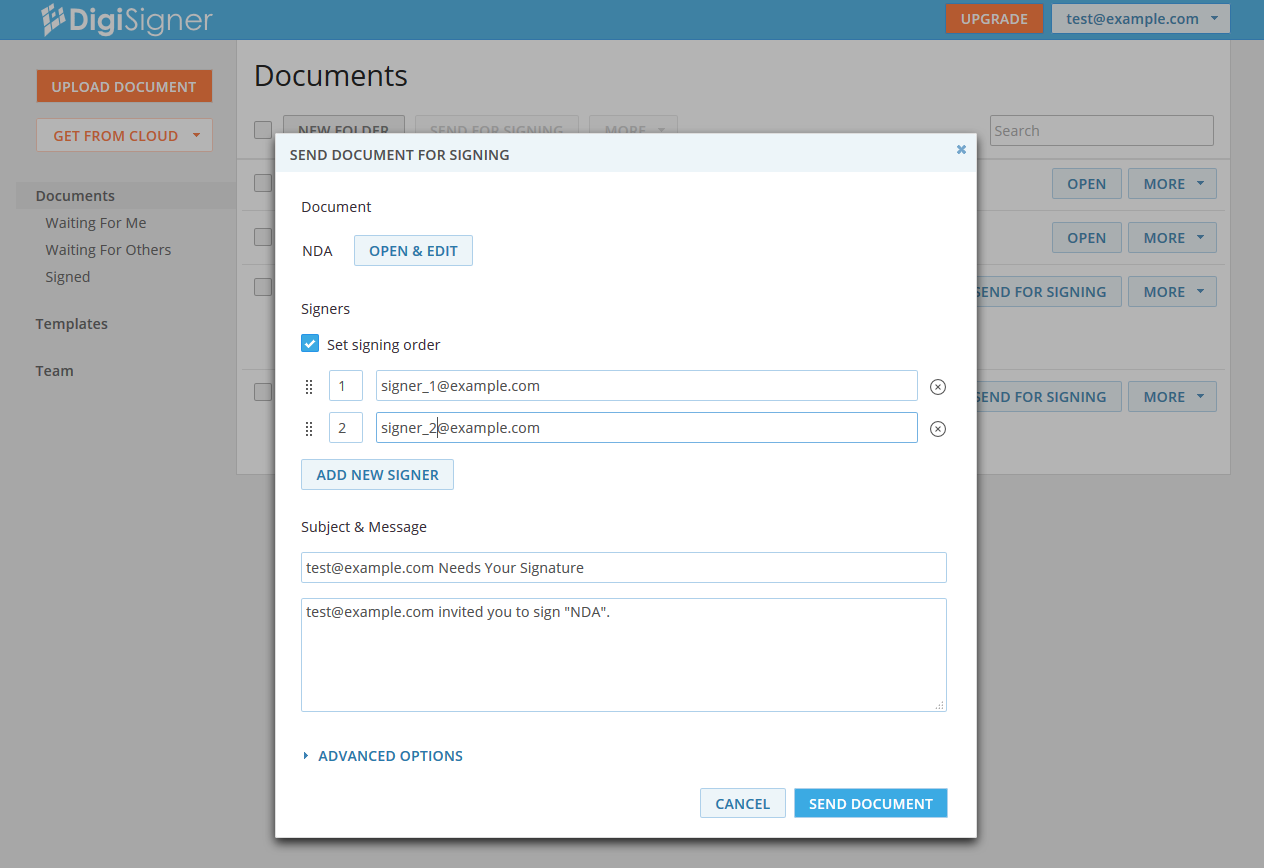 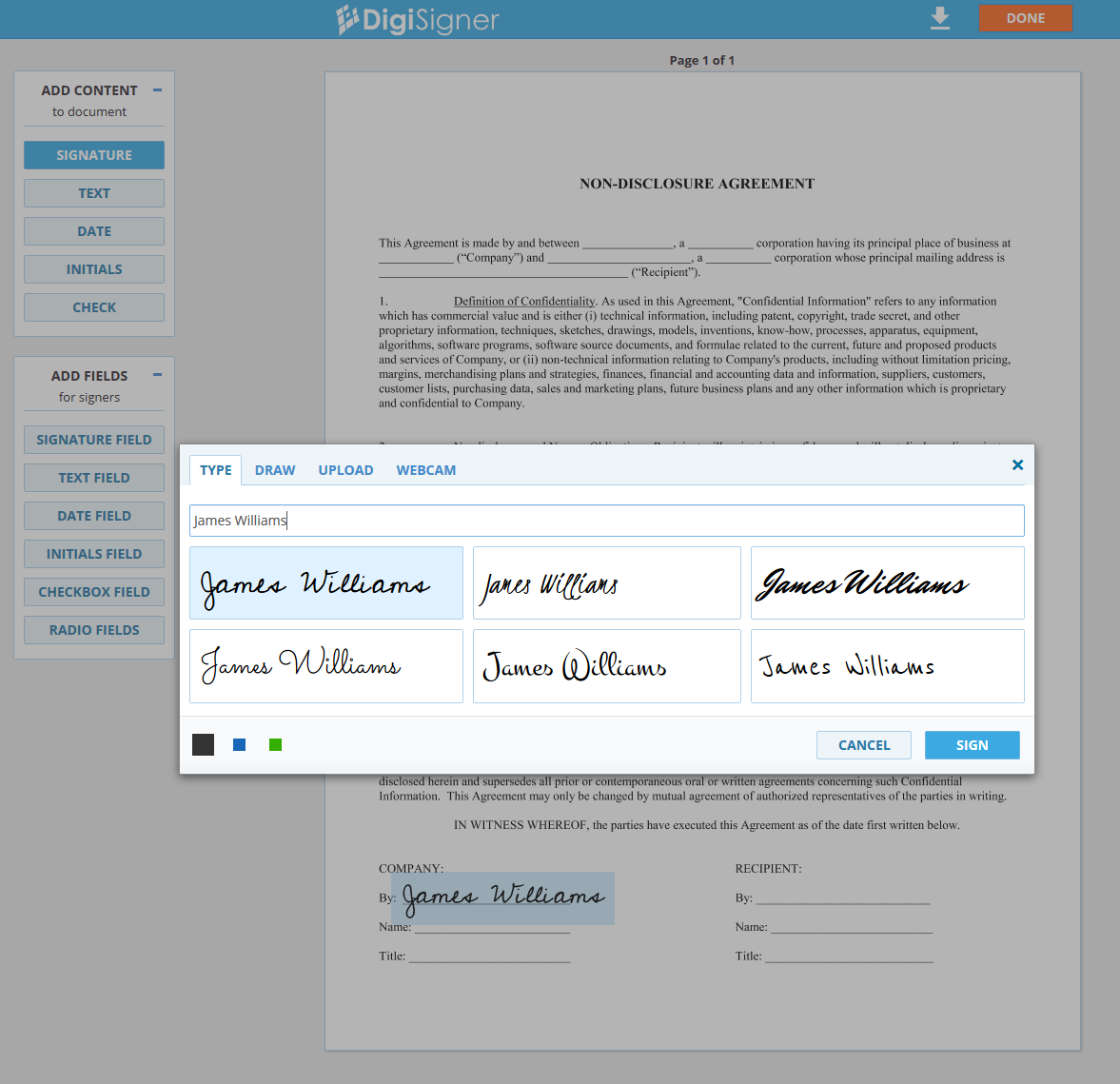 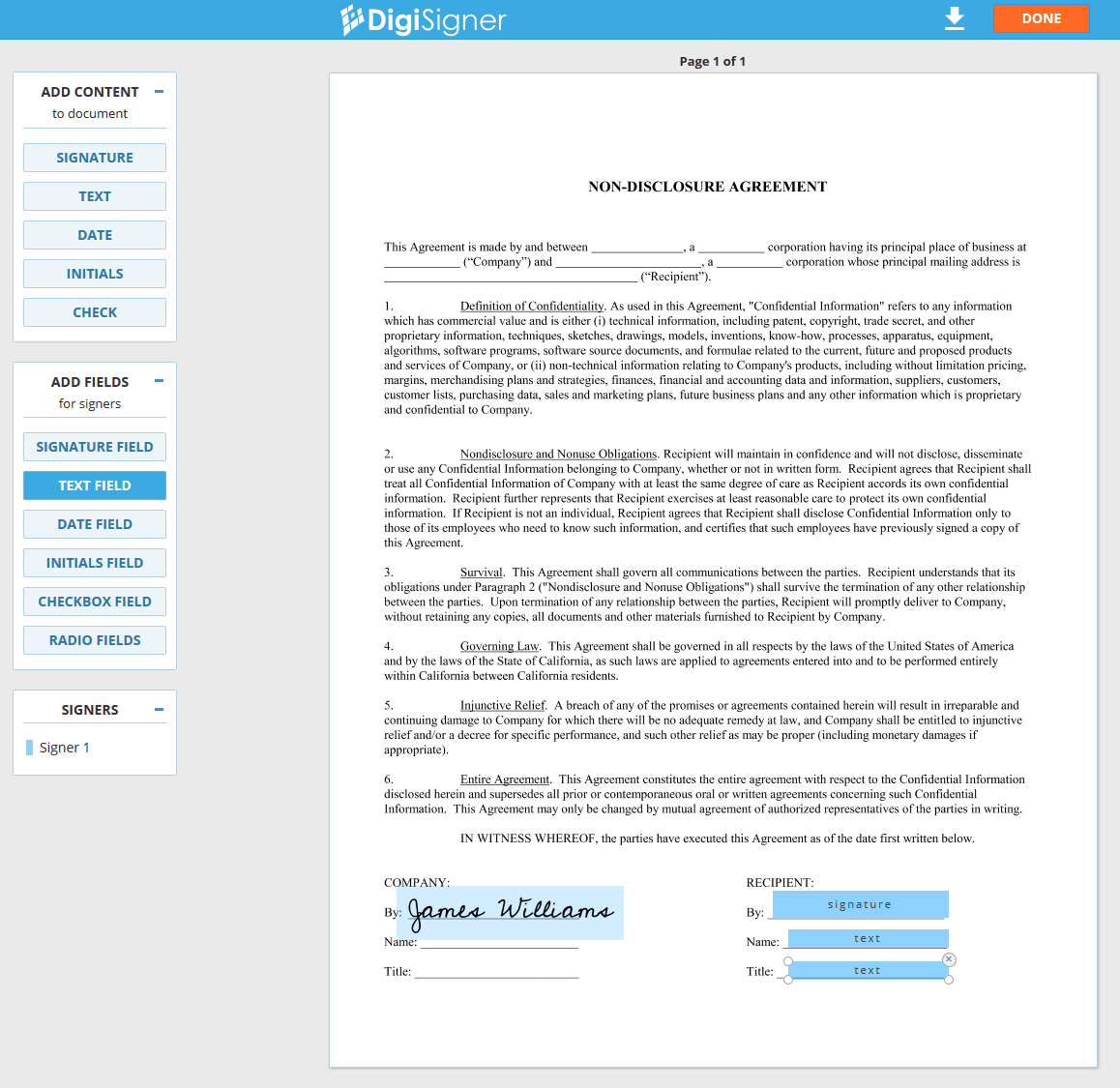 DigiSigner has a free version and offers a free trial. DigiSigner paid version starts at US$10.00/month.

5 (1902 Reviews)
eversign is a cloud-based digital signature solution that caters to businesses of all sizes across various industry...
Visit Website

4.5 (367 Reviews)
SignEasy is a cloud-based solution designed to help businesses across various industry verticals such as real estate,...
Learn More

4.5 (331 Reviews)
SignRequest is an electronic signature solution that allows customers to send and sign documents or contracts online....
Visit Website

4.5 (276 Reviews)
HelloSign is a cloud-based platform designed to help businesses send and receive electronic signatures on documents in...
Learn More

4.5 (845 Reviews)
eFileCabinet is a document management solution focused on helping businesses of any size to improve their profitability...
Learn More
View all alternatives

It works quite well for me. I'm able to send documents to clients and contractors without any issues. I'll re-evaluate once we are consistently sending more than 10 documents a month to see if a different paid software is better or if we'll stick with digisigner.

It's actually free for up to 10 documents a month (I think) so it's perfect while we are growing and need to keep costs to a minimum.

There isn't a prompt to set the various fields. I have to stop and remember each time before sending the emails.

My overall experience with Digisigner is positive. I've been able to run the paperwork parts of my business online since the pandemic started, and Digisigner was relatively easy to figure out and use. I like that I have less papers around the office too, it's more environmentally friendly. There are certain parts of it that are a bit buggy (like importing a template as a Word Doc can result in some wonky formatting changes), but overall it's been reliable software that is competitively priced compared to some other brands.

I appreciate that this software made it relatively easy for me to move my forms online at the start of the pandemic and accept all my intake paperwork, waivers, etc. electronically from clients. It's easy to send the forms in a bundle and get notified when they fill out the forms.

Particularly with some of my elderly (would-be) clients, they seem to have trouble hitting the "DONE" button at the top of the form and correctly submitting the form. They think they have submitted it but they haven't. This has happened several times with several folks who then choose not to be clients because they've spent 30 minutes filling out forms and think they've submitted them, only to lose their work. I wish that the forms could save as they went along automatically or were otherwise a bit more goof-proof.

Not as good as it could be

I'd give it a 2/10. It used to be better, but it no longer works just to DIGISIGN something and then send it off in PDF format. Right now, any modified documents MUST be printed, scanned, and then sent off. So, I've returned to simply printing off the blank document and filling out forms by hand instead of using Digisigner.

The idea that you can modify a PDF to ad your name and digital signature on a document, and then send it along

OFTEN, when sending the filled out version of a PDF document, the Digisigner added texts do not appear on the saved version, not only making the software useless, but wasting the user's time as well. This needs to be a feature that WORKS EVERY TIME and doesn't require special settings or program alterations.

Many features that should work well on the free version are cumbersome. Menu items appear redundant and confusing. The menu features need to be cleaned up significantly, or reworded so the end user knows exactly what each feature does.

I love using Digisigner! My clients love it! Please don't change anything!!

I love that Digisigner doesn't stamp their logo, time, and date onto the documents like DocuSign does. That is the specific reason I use Digisigner - it's the most discreet digital signature service on the market!

I have zero complaints, I love this software!

Compared to DocuSign, DigiSigner is a better value for our company needs! The customization is great; we like the ability to separate the transaction page and our clients easily converted over from DocuSign.

Sending multiple documents is a bit more cumbersome but we figured it out!