BenchmarkONE (formerly Hatchbuck) is a sales and marketing solution designed for small to midsize businesses. The integrated solution offers combined sales automation, marketing automation and email marketing features. BenchmarkONE is a good fit for a wide range of businesses, including teams in advertising, consulting, hospitality, real estate and more. BenchmarkONE includes features to help users more effectively maintain and track both prospective and existing clients. Contacts can be imported from Outlook, Excel, and LinkedIn, while leads can be captured from the company website, blog or social media sites with a straightforward "drag and drop" form builder. BenchmarkONE offers a robust library with 450 email templates that can be used directly or can be customized using the software's template builder. Users can set up automatic emails to specific groups of contacts and track the progress of campaigns. The software runs on both Mac and PCs, and can be accessed via any device with Internet connectivity, including iPads. 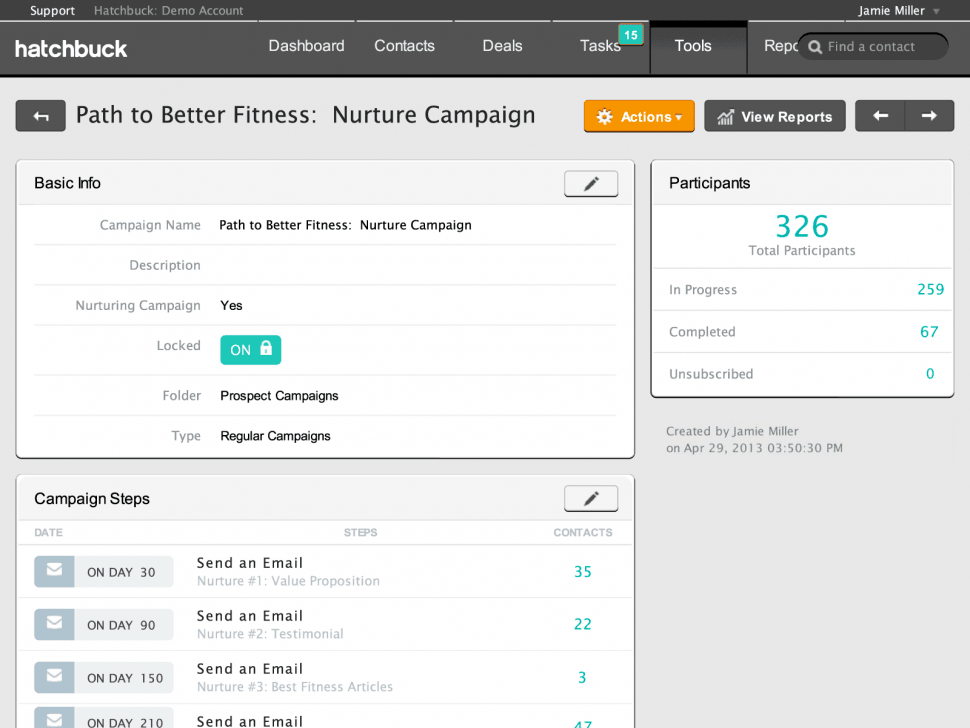 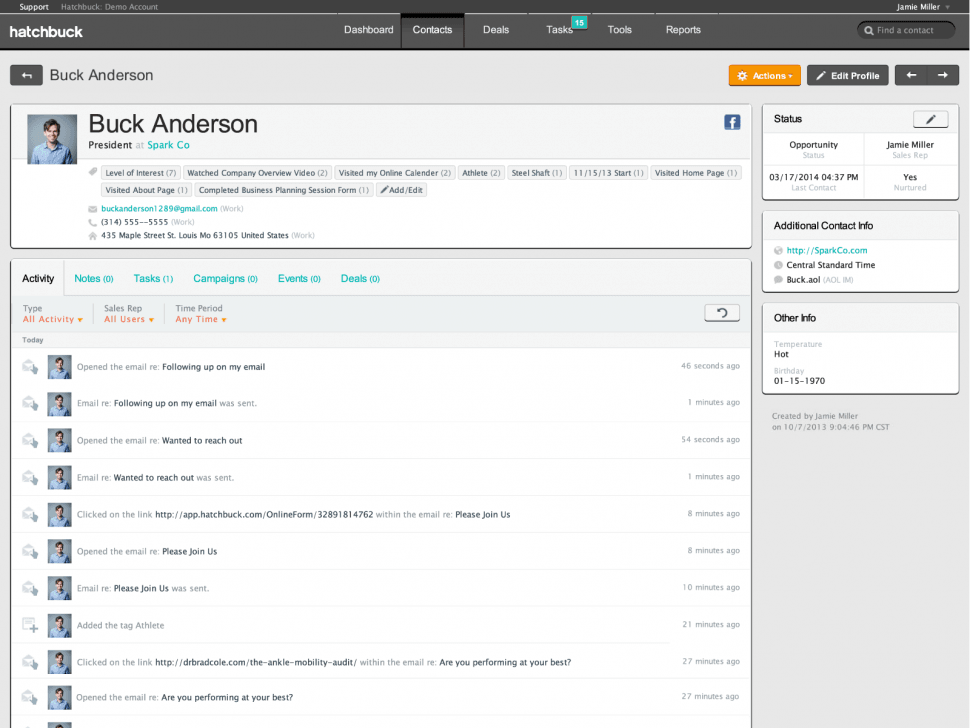 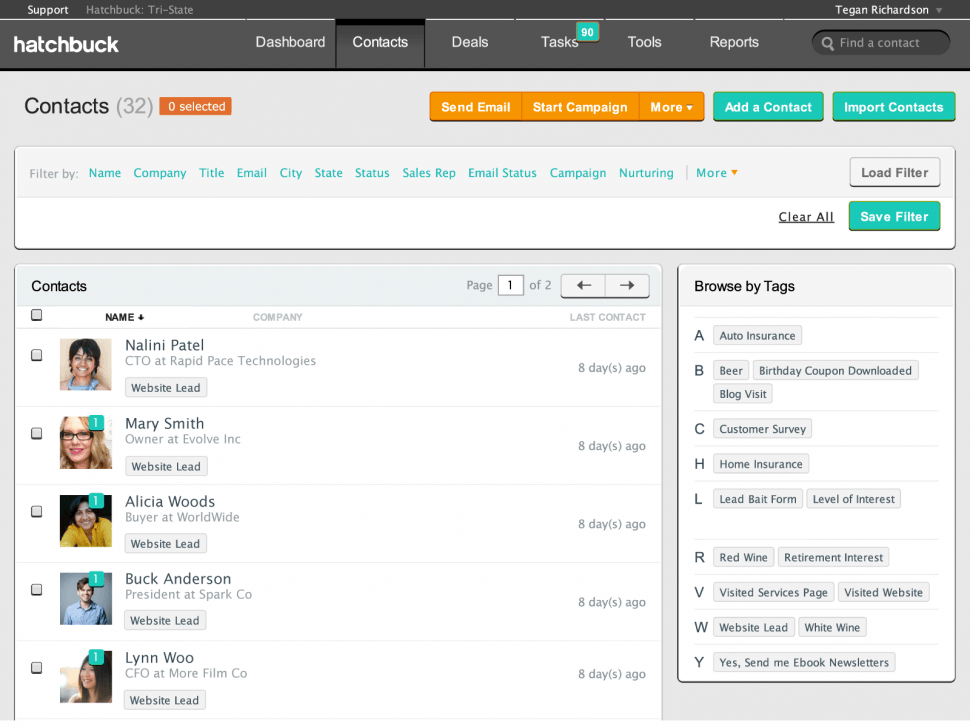 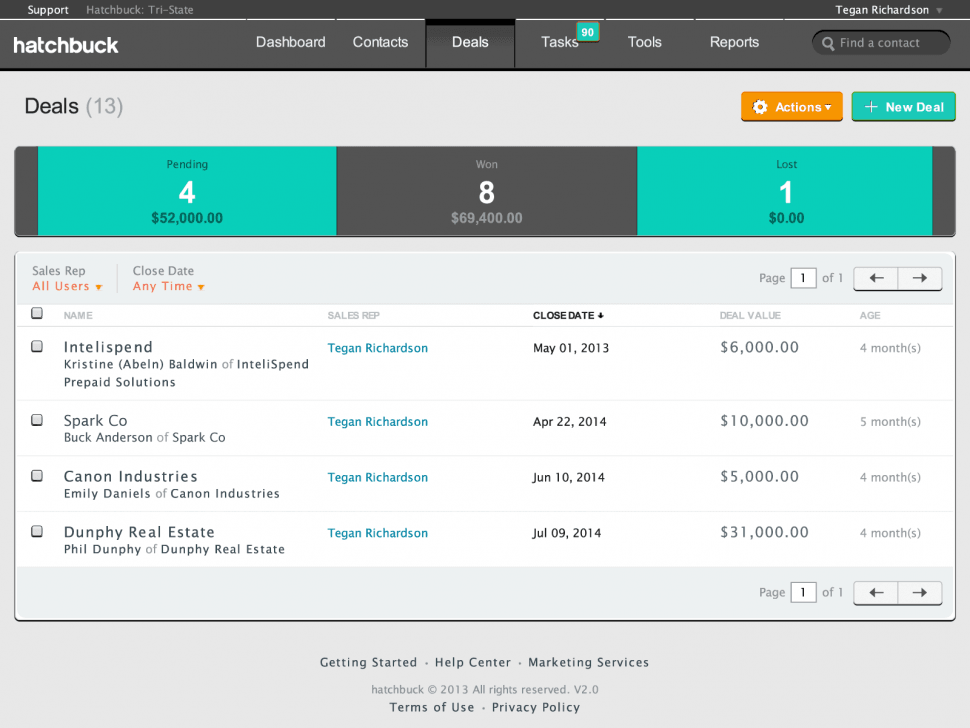 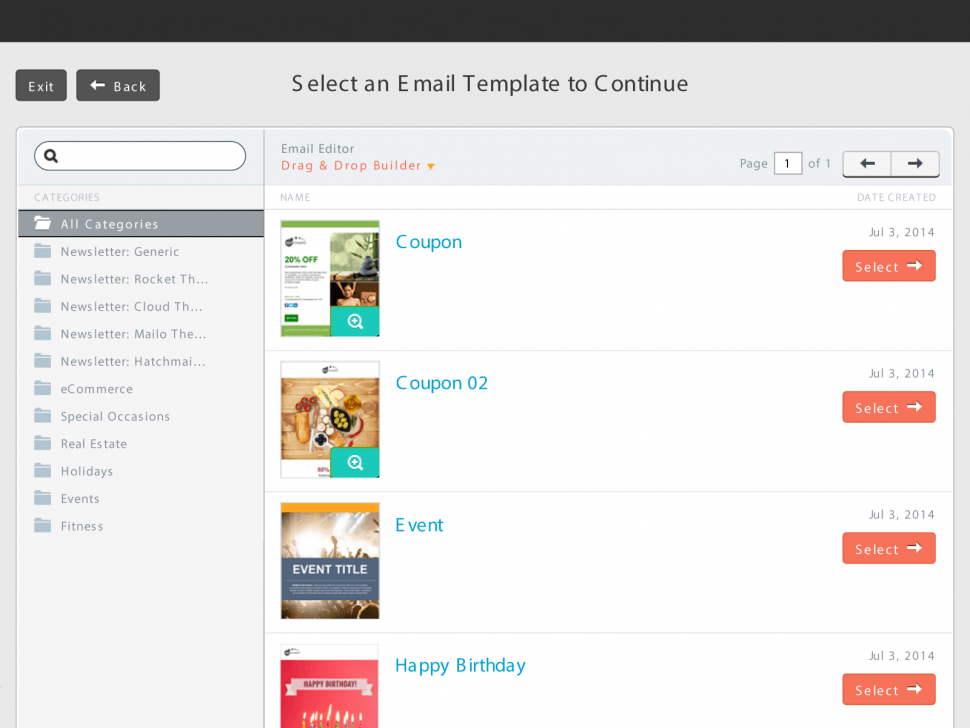 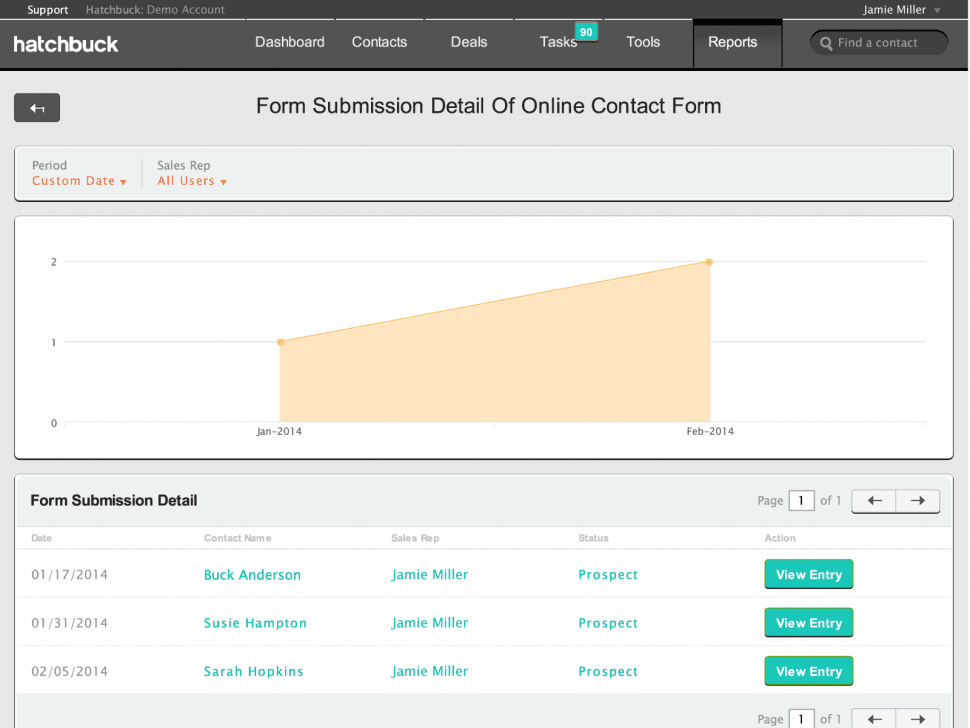 BenchmarkONE has a free version and offers a free trial.

0 (4856 Reviews)
Zoho CRM is a cloud-based business management platform that caters to businesses of all sizes. It offers sales and...
Visit Website

4.5 (30 Reviews)
User.com is a full-stack marketing automation platform that converts visitors into satisfied and loyal customers. The...
Learn More

4.5 (904 Reviews)
Marketing 360 is a cloud-based marketing platform suited for entrepreneurs as well as small and midsize businesses....
Learn More

4.5 (14195 Reviews)
MailChimp is a web-based email marketing service with millions of users worldwide. The application allows users to...
Learn More
View all alternatives

The happy lil' secret in the automated marketing world!

Allows a small marketing outfit to punch above its weight and focus follow-on efforts on the more high-valued prospects.

Hatchbuck is great. What? I need to write more? ok. It allows you to create or upload documents, you can include them as well as links into emails, and then combine emails into campaigns where they are delivered at preset times. But that's far from all! Hatchbuck monitors the customer's interactions with your email and awards score points (defined by you) for various activities like visting your website, reading an email, downloading a document or clicking on a link. So when you open Hb you can review the current scores and follow up with the prospects who are raising their hands the furthest. But, there's more! Where Hb 'really' excels is in the logic of these campaigns. For example... if you have a campaign for general interest which you are sending to a generic group and a customer evinces particular interest in your offering (clicks or downloads a lot) Hb logic can detect this and move him to a more aggressive sales campaign. Hb can notify you for any specific buying signal. Hb can send the customer (again, automatically) additional materials based on actions ("oh, you like case studies, eh, take a look at this one") . If you do the campaigns correctly Hb is really a 'fire and forget' homing missile. It has a tremendous number of features (searching and segmentation are awesome) and because of its price structure, it really allows a small company to punch waaaay above its weight class. I'm happy!

A few things. I'm not crazy about the HTML design tool. (Or, perhaps, I'm a lousy designer?) It seems too old-fashioned. You can get false positives from the lead score system -- especially if you email to high security places like financial institutions whose bots click on everything to test your email for spy/malware. Its awkward to try to call a super high scoring customer who 'appears' fascinated with your content only to learn that he left 6 months ago and the bots are still screening his email. :-(

Very good value for the money. The scoring is very helpful in qualifying prospects and interest.

Not much. It hits the highlights and is affordable.

Also, the relaunch did not bring the features which were somewhat announces, e.g. imap integration only possible for gmail as of now.

Very nice people in service, easy to use. Pricing is all right, looks nice, has some nice dashboard eye candy

Simply not reliable anymore, after the relaunch earlier this year, there are too many incidents where you are not in control of what hatchbuck is doing: e.g. unsubscribe doesn´t work: no confirmation that a user unsubscribed and campaigns do not stop, so unsubscribing users might get more emails from you. Embarrassing? Yes. Potentially causing credibility and even legal problem? yeah.

Also, automations set for users who subscribe sometimes do not properly work. Conditions are unclear. e.g. Opt-in process: an online form might be set on option in - but that doesn't mean that it actually triggers the necessary steps. Embarrassing? Yes. Potentially causing credibility and even legal problem? yeah.

And - this made me really re-evaluate other options: there was this bug which made other customers´ dashboard appear in my log-in. So I saw all activities going on from another company which also is a hatchbuck user. this made me ask myself if other hatchbuck users at the same time see my stuff/ activities/ personal data of my customers....Again: Embarassing? Yes. Potentially causing credibility and even legal problem? yeah.

I do understand that there might be some issues after releasing a relaunch - however when it comes to processes which involve my leads/ customers and make us as a company look unprofessional (no opt-in, no unsubscribe, potential abuse of personal data of leads....) this is beyond any acceptable level and an absolute no-go. We are located in Germany and people are very sensitive about data protection and laws are very strict - we could get sued for each of the three points mentioned above.

Ease of use, ability to get it set up without engineers
The tasks and campaigns are also AWESOME

Would love if you could text from the platform to customers

Haven't had a bad experience with it yet, awesome CRM

Amazing experience, software is easy to use. The support team is awesome, anytime I have a question they respond quickly and politely. They make me feel like one of their top clients, even though I'm nowhere near that.

The only gripe (it's small) that I have is that you can't have a more broad view of your customer database. It only allows 100 per page and wish it could zoom out more, so I could see more customers in front of me at once.